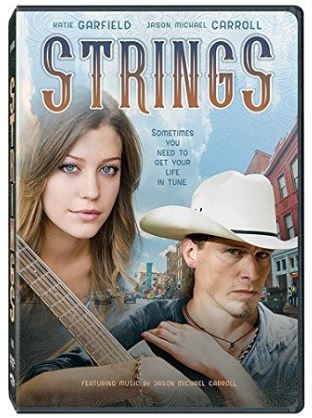 Johnny was asked by his longtime friend Jason Michael Carroll to be a part of the Critically Acclaimed film called “STRINGS” now available on Amazon Prime Video.
The DVD is also available for purchase with Amazon as well.
Johnny was asked to play the part of character J.C. Pascal, a frustrated artist who had moved to Nashville to “make it” in the music business and had finally had enough of the disappointments to the point of deciding to move back home, but not before meeting “Jimmy Ford” (Jason Michael Carroll), and giving him some cynical advice on how to maneuver his way through “making it” in this town.
Johnny was not only asked to be in the movie, but partnered up with Jason to write one of the movie’s singles- “The Reason”, as well as Johnny’s own song “Down South” (John & John Entertainment-Bonfire Music) (BMI) As well as a few other earlier released material that Johnny was a co-writer on with former bandmates James Floyt, Miller Barefoot, and Matthew Crane of the band Astor’s Cane for which Johnny was the front man singer and guitar player of.
So when you hit PLAY on this future cult classic film, you’ll hear Johnny’s former roots immediately on the hit song from the 90’s called “This Life” as the movie begins to roll through the hallway of the Raleigh, NC based club “The Pour House”. So if you’re in to independent films with great music as the forefront mixing country with some great rock-n-roll, then this is a movie that you should check out.
Go to your Amazon.com account and search for STRINGS MOVIE. Enjoy